Hello everyone! For those who are relatively new to the blog I need to start by not only welcoming you, but also by warning you. This resource category is probably the most misnamed and/or hodgepodge grouping I have on the whole site. While originally meant to utilize famous, or infamous, examples of these object tropes, the category is a bit of a catch-all for story-telling devices. As such, we continue that trend with three interesting concepts that, in themselves, aren’t devices. They can, however, be quite powerful tools for your story telling but you have to place them in the hands of the right characters. Here are three psychological occurrences (and sometimes conscious weapons) that might aid your villains and their cause.

This is a commonly used tactic and fallacy that we all-too-regularly see used in the real world today. For those who don’t know, the strawman argument is named for the fact that it is analogous to a strawman, a fake that can be propped up and looks real enough to do something about without actually having any meaning in itself. A strawman argument is one that refutes a point by arguing against another point entirely. By building up the point, arguing against it, and refuting it the original point is refuted. The trick is in the fact that the original point is a bystander, caught in the crossfire, and of no consequence to whether the strawman argument holds or not. Today we often see this as a very dubious and purposeful tactic of undermining someone, but it is also the accidental ignorance or assumption of a party. I have witnessed strawman arguments made simply due to a belief that one thing really has something to do with another, or simply in an attempt to skip a multifaceted, downstream affect. In a game both of these can be used, but the purposeful tact of the villain calls for a full enforcement of strawman tactics, especially if playing in a game with any kind of intrigue or political maneuvering. The strawman might be obvious to the PCs or a friendly NPC, but not to the NPCs at large and this might result in some terrible consequences and long-lasting delusions. Of course, you might also reveal the strawman later in a position where the PCs cannot rebut with new information. The key to the strawman argument is fervent and emphatic argument. Let the villain steamroll their way through a conversation, council meeting, public gathering, or what have you. In such positions it will be a matter of difficulty for the PCs to do something about it, especially if unprepared. 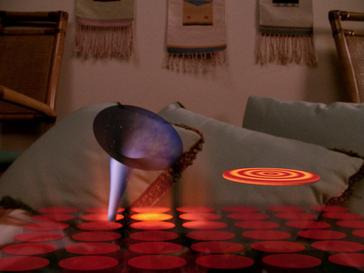 From Star Trek: TNG “The Game”

Here is another common thing we see too often. We have all heard the phrase “hopping on the bandwagon”. Often it is a phrase used for sports fans who reveal themselves when a team is winning, someone who finally gives in to buying something after everyone else owns it, or some similar occurrence. What is interesting about the bandwagon effect is that it isn’t just a turn of phrase. There is a bit of social and psychological underpinning to it. When it comes down to it a part of social creatures want to conform, they want to be like other social creatures. The more people there are doing something, the more you want to do it. There is a drive to be a part of the group. There is a lizard brain part of people that need to prove they are at least as good as everyone else by doing “the thing” and definitely better than those who aren’t doing the thing yet. This can work in all kinds of fun ways for your game. You can work this to a villain’s advantage, with them seeding ideas or cursed items and the general populace catching onto it. Like the episode of Star Trek with the strange drug-like game, the more people who play it the more likely the next person is. Of course, part of this isn’t just the subconscious desire, part of it is exposure. The more exposed you are to it (and don’t forget appeal is helpful) the more likely you are to, as I’ve called it, do the thing. The bandwagon effect doesn’t have to be a nefarious plot device though. It could also just be a nod to a character. Perhaps they proved themselves in a public contest and now everyone wants the hat they have. Something small that will prove a lot of fun for the PCs.

Another common sight for us today, the either-or fallacy is a fallacy that leads you to make an assumption, even if it isn’t a conscious one. What happens is that there is a dilemma of some kind. It can be virtually any dilemma that you could conjure up, just so long as there are multiple options, decisions, or ways out of the problem. With the either-or fallacy, someone presents the dilemma in such a way as to suggest that there are two possible responses or outcomes. Either this happens or that happens. We either do this or we do that. The problem is, for most things in life (as we all well learn) nothing is ever so simple and, as such, neither are the answers. With a false dilemma we could respond in a number of ways that aren’t the two presented, but the dilemma is also often presented in such a way that we are made to believe those are the only options. This is actually a regular occurrence in folklore and fantasy games. For example, a demon of (I believe) Japanese folklore will haunt a restroom and ask someone if they would like blue paper or red. Either choice will kill you but the fright of the situation and the insistence of choice by the creature might force you into making one of those two choice. Of course there are many more colors than that, but I warn you those will just get you dragged to hell. No, instead think even further and request no paper at all and be saved (if a little dirty). Riddles in dungeons or complex problems also come as false dilemmas or player’s may place an either-or fallacy on themselves. As much as you can make use of the concept, I place it here today as a reminder and warning. If your players are caught in an either-or fallacy, especially one of their own making, help guide them away from it. There is nothing more frustrating than believing 100% you have two options when the right answer was option five.

Get The Latest Updates!

Have Fun With Us!